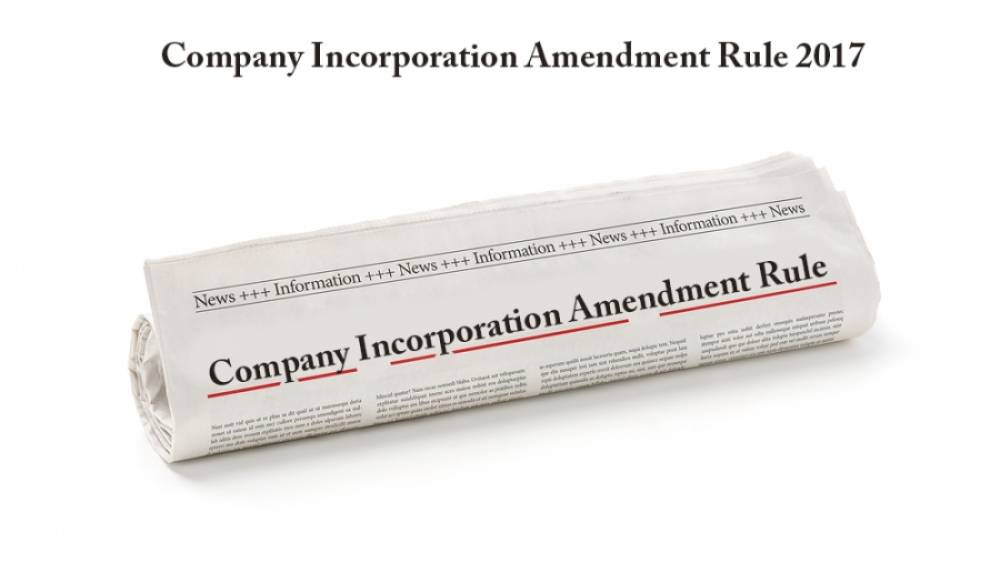 Ministry of Corporate Affairs has issued the Companies Amendment Rules, 2017. These rules have been amended on Companies (Incorporation) Rules, 2014 also known as the� �Principal Rules�. Amendment Rule 2017 came into force on 30th January 2017.

�Certificate of Incorporation will be issued by the Registrar in Form No. INC.11. It shall also mention Permanent Account Number of the company where it will be issued by the Income tax department which have been substituted in Rule 18. Previously, the Principal Rules were silent on the aspect of certificate of incorporation mentioning about the PAN.

In addition the Amendment Rules have also substituted Form No. INC-11 i.e �Certificate of Incorporation� and Form No.INC-32 SPICe (Simplified Proforma for Incorporating Company Electronically) with new ones.

Mainly the amendments the Companies (Incorporation) Rules, 2014 were amended by the Companies Incorporation (Amendment) Rules, 2017 were on January 25, 2017, and the rules Revised and the same came into effect on January 30, 2017. With the new type of 'SPICe' (Simplified Proforma for Incorporating Company Electronically) now necessitates obligatory submissions for both PAN (Permanent Account Number) and TAN (Tax Deduction Account Number) for all new filings.

There has been notice by the MCA for cases marked for resubmission for which stakeholders are required to download the older version of SPICe form for resubmission. This has been accepted after February 1 2017

According to the revised format it requires fresh applicants to submit duly signed PAN and TAN forms linked with the SPICe form and these corollary linked forms for PAN and TAN will be auto generated once the SPICe forms are submitted with the MCA21 system. After 49A there has been a new version after the new version of SPICe application. The payment of requisite fee is confirmed by the MCA.

Benefits from the Amendment 2017

Amendment has put things for forward by enabling the creation of a single platform that enables digital submission of incorporation documents along with e-Memorandum of Association(e-MOA) and e-Articles of Association (e-AOA) within streamlined timeframes. It also underscores a consolidated attempt to incorporate companies together with tax identification of the entity.